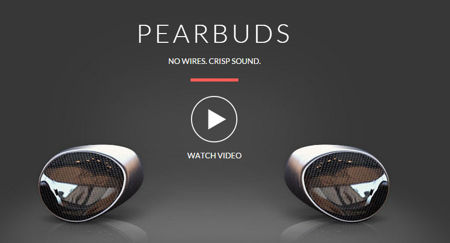 Having a pair of wireless headphones or earbuds are nothing new – there are already so many different of such models out there in the market, that it can be pretty much a decent purchase regardless of which particular model that you decide to settle with for. Once in a while, something different pops up – an idea that will hopefully improve on what is already in the market, and the Pearbuds more or less falls under this particular category. Basically, the Pearbuds will let you listen to music on the go without tangled cords or bulky over-ear headphones, and it works by merging Bluetooth chips and high-quality audio technology in order to reduce the entire earbud down to the size of a coin, now how about it being compact?

Being wireless would mean it needs to have a built-in battery, so just how long can it last on a pair of batteries? Apparently, the Pearbuds will deliver high-quality sound with a six-hour battery life, arriving in a sleek metallic finish, in order to make wireless earbuds a fashionable and convenient accessory which will appeal to just about everyone. It has just launched last week on Kickstarter, where the Pearbuds project will hopefully be able to raise at least $50,000 in order for it to scale up manufacturing – and to deliver the product to market as soon as possible.

The Pearbuds were specially designed to help people get rid of their bulky, restrictive headphones which are not compatible with today’s active lifestyles. It does not matter if you are a cyclist or a runner, as long as you would want to listen to music while going through the motions of your favorite physical exercise, you can always rely on the Pearbuds to get the job done, as it does away with the issue of tangling cords that restrict free movement.

Pricing starts at $99 at the moment which is 50% off the retail price, and that makes it a pretty good bargain if you have the feeling that it will be realized.

1 thought on “Pearbuds lets you listen to music wirelessly”