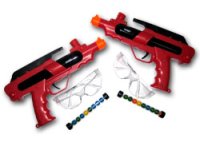 What is your kid doing cooped up in the living room with the Xbox 360 throughout the entire summer? Banish that thought by introducing him to the great outdoors known as your backyard, and make the entire experience all the more interesting and interactive with the Patriot Paintball Gun Twin Pack.

Aim, fire, SPLAT! This serious adults-only set of paintball pistols is not for the faint hearted! Complete with safety goggles and two tubes of biodegradable water soluble paintballs so they wash off your clothes, this is quite possibly the most fun we’ve ever had with a couple of pint-sized pistols. Take a few pot shots at the wipe clean target or unleash a multicoloured messy attack on your enemies! The high powered paintball guns are pretty accurate and shoot well over long distances; just pull back the loading lever, push back into position, aim and fire! Your paintball guns require no batteries or CO2 making them very easy to use and lots and lots of fun! All you have to do is make sure your paintball pistols are locked and loaded with paintballs and you’re ready for a quick firing frenzy! Extra paintballs can be bought separately.

Who knows? Instead of playing a paintball simulation on the Xbox 360 itself, your teen might pick up a love for the sport and end up being a professional one day instead. The Patriot Paintball Gun Twin Pack retails for £29.95.