You might ask why the fancy title. Well, I’ve been reading various blogs today, and I’m truly and utterly revolted. I won’t link to any of those articles now, simply because I consider them to be too stupid to read.

What happened is that Microsoft has applied for a patent. This patent is for a new interface program to be used with Windows Mobile. It comes as an optimization for touchscreen, as most of us know how quirky Windows Mobile devices are when used with a touchscreen. HTC has tried to do something about it with the Touch, but they haven’t quite succeeded. Also, the TouchFlo interface copies a bit from compiz/beryl (a free graphic shell for linux) and the scrolling comes from the iPhone, indeed.

Read on to see what crimes Microsoft have committed again.

So… What have they done?.. golly… They dared to use a normal horizontal list whose items one can touch. And if that wasn’t enough, they also had the guts to also include a carousel menu!!! Can you figure that?..

Then, the vast majority got ripping “looks strangely like Apple’s”, “rips the iPhone” and so on. People, have you been brainwashed? How can you post such crap?.. As far as anyone living on this planet and having some grey cells can remember that lists and carousel menus have existed in cellphones and not only for ages!..

I won’t even delve into details about the list. A list is the most basic of menus you will find. Putting it inside a large button is only natural when you design a touch interface meant to be operated with a finger.

Now, the carousel view. That, too, has been available for ages, in cheap phones, too. In smartphones, the first I ever saw was Nokia,s the Image Manager first featured in the 6630. Long before the iPhone, right? Nowadays, users of devices like the N95 surely know it. Some uber-blogger now insinuates that it’s a ripoff of Coverflow. Ha!

Ok now, enough with the rants. Let’s take a critical look at the MS patent. There’s been a natural tendency to mock the iPhone because it is not open and customizable. Microsoft have now taken to the extreme opposite of that: menus can be customized, created and arranged in whatever way the user desires. Very nice, that.

From what I see and read, media menus can be lists, carousel displays or thumbnail menus. Photo, video and music albums, all nicely organized, just like the folders on your computer. Grid sizes are free to be altered, scrolled or whatever. Again, fully customizable.

A nice innovation comes with the messaging interface. It will combine more types of messaging. Here comes the only thing that’s “ripped” from the iPhone: a form of visual voicemail. What actually happens is that voice messages are now mixed with SMS, in a list. But that’s not all. You can add/remove all sorts of messages from the main messaging list: text, voice, video, and all sorts of e-mail protocols.

I’ll let some pictures do the rest of the talking. If you want to know more, there’s always the patent application to be read. Ironically, to see the figures there, you’ll need Quicktime. 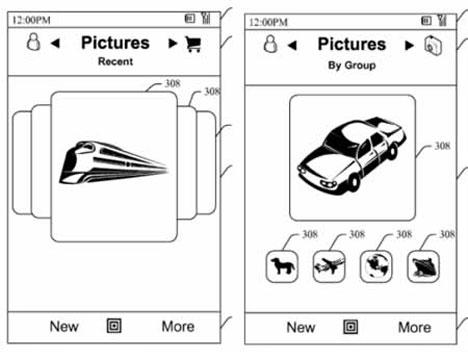 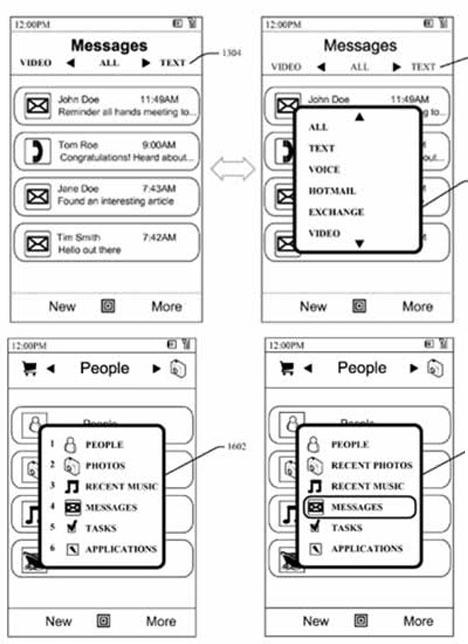