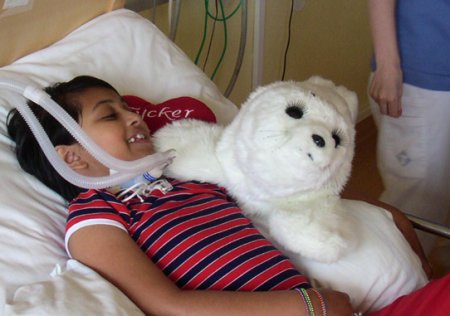 Robots are meant to be cold and calculative, but nice to know that the human touch is still there in the PARO robot. In case this sounds familiar, you might have read about a robotic seal-like creature making its rounds on the Internet in the past year, talking about the PARO robot. Well, this white, furry chunk of circuitry and plush materials does not only look cute, it has a higher purpose in its life(span). Its mission is to offer relaxation, entertainment and companionship to the owners. More on the PARO robot right after the jump.

PARO has many effable qualities, and among them include :-

Specially designed to look like an adorable baby harp seal (at least you can be sure that this pup won’t be clubbed to death), the PARO robot comes with integrated intelligence that enables it to possess psychological, physiological, and social effects via physical interaction with human beings. PARO imitates animal behavior (not all though, good thing you don’t have to feed it, bathe it or clean up its poo), being more than capable of responding to various external stimuli including light, sound, temperature, touch and posture. Over time, PARO will develop its own character, so no two are ever alike – hmmm, sounds pretty much like the Pleo, eh?

The first production lot of 300 PAROs for the US market will be out in January next year, which means it will miss the lucrative Christmas shopping season. I suppose that doesn’t really matter since PARO comes with a price tag of $6,000, placing it well out of reach for most people but the well-heeled. Pre-orders will be taken from December 1st onwards by phone, fax or e-mail.