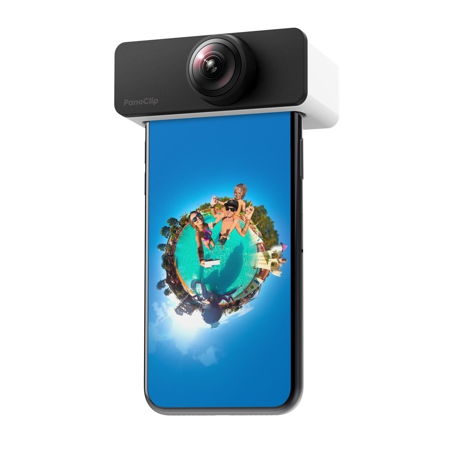 Taking a panoramic shot of anything is always a novelty for me, perhaps due to the fact that I grew up on 4R prints. There is something magical about panoramic shots, they simply convey a sense of space and majesty, especially when it concerns a breathtaking view from the top of a mountain or somewhere similar. Well, the PanoClip that has been recently launched is something that all iPhone users might want to check out if panoramic shots are their cup of tea, as it is able to allow virtually anyone to effortlessly snap 360 photos as well as “Tiny Planet” shots, all right from their smartphone. It makes use of a cleverly designed dual-lens system, where the PanoClip will snap instantly onto a smartphone before the software works on stitching together the shots to create seamless 360 photos through a clever combination of images from both front and rear cameras.

iPhone users who are interested in picking up the PanoClip will be able to do so for a relatively affordable price point of $49.99 apiece, and for a device that proudly claims to be the first of its kind, it is certainly extremely affordable. It will pair up with the most commonly used camera these days, the one found on the iPhone, which would mean that we should see more 360 shots appear on social media profiles everywhere in due time should the PanoClip take off in a big way.

While the PanoClip functions on a similar principle as that of traditional 360 cameras, it will only use two cameras in order to achieve a similar result. This is made possible courtesy of its super-wide-angle lenses that will work in tandem with the handset’s front and rear cameras, while sharing the fruit of your labor afterwards on social media platforms such as Instagram, Snapchat, Twitter, or Facebook is a snap.