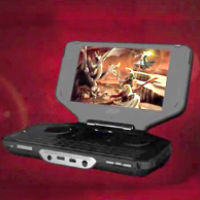 Panasonic hasn’t been into the home video game market since the 3DO, which was not able to compete with Sega and Nintendo back in its initial release in 1993.

They have chosen to re-enter the video market with the Jungle, this portable video gaming system here. Considering that Nintendo’s 3DS is coming very soon, some might think that Panasonic’s sudden move into the handheld gaming market could be a mistake.

However, the Jungle has something that other handhelds don’t have. It allows the player to play online games like massively-multiplayer online (MMO) ones. So for those who want to take their World of Warcraft game online, it could be a Jungle out there.

Considering the success of MMO games is due to the PC, they are not usually portable unless you have expensive gaming laptops. If it is possible to get a less-expensive handheld that can do the same thing, then consumers just might be “game”.

This “play anywhere” feature is possible with Wi-Fi and 3G. It should also feature a directional control pad as well as a set of buttons for controller, not to mention a QWERTY keyboard. Little else is known about the games available for it, except some Battlestar Galactica themed ones. We also do not know its release date or price.