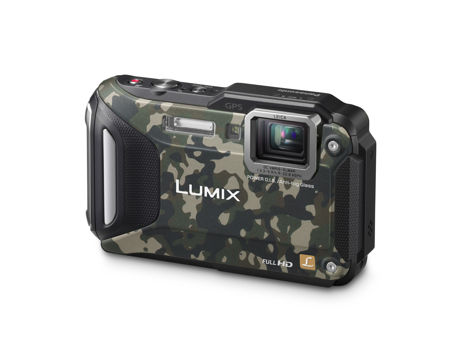 We live in a world where photos happen to say a whole lot – and any strategically captured image can go viral in an instant. However, there are some situations where consumer electronic devices like smartphones and tablets are unable to shoot photos simply because there is a risk of said device “drowning”. Waterproof handsets are not too commonplace either, so if you absolutely need to capture photos wherever you are, dare I suggest the Panasonic LUMIX TS6 camera? The new 16.1-megapixel LUMIX DMC-TS6 camera will sport a 28mm wide angle 4.6x optical zoom LEICA lens (35mm equivalent: 28-128mm), coming in a rugged design that the TS series is famous for.

It has been exclusively geared for outdoor use, sporting the ability to capture video in Full HD glory, at the same time sporting waterproof capability of up to 43 feet and 220 lbf pressure resistance. Want to transfer captured images and videos to a notebook or desktop sans wires? That’s a piece of cake with built-in Wi-Fi connectivity with NFC (Near Field Communication) technology. Apart from that, the Panasonic LUMIX TS6 camera is one tough cookie by being dustproof, shockproof to 6.6 feet, freeze-proof to -10℃ and pressure resistant to 220 lbf, ensuring it will continue to go on even in the most extreme of conditions out there.

Interestingly enough, you can use the smartphone/tablet to function as another monitor of the camera which will enable one to set the focus, zoom or release the shutter away from the spot where the camera is positioned.

Integrated GPS (Global Positioning System) which complies with GLONASS (Global Navigation Satellite System) would deliver a high level of accuracy, while it even comes equipped with a compass, altimeter and barometer to cater to outdoor enthusiasts. It boasts of a 16.1MP High Sensitivity MOS sensor, has a range of built-in special effects to pick from, and a Torch Light function that adds another dimension to its LED flash. Pricing details have yet to be determined, but it looks like the LUMIX TS6 is set to be a winner here.