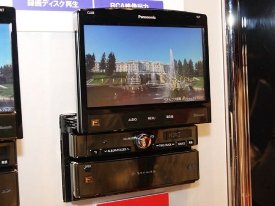 Ah, Blu-ray. Can anything stop this fad from spreading? I don’t know, can it? Seriously, is Blu-ray taking the world by storm? If so, it is a slow storm brewing.

The first of these new products is the CN-HX3000D. It is a Windows-powered device with a seven inch screen with 1280 x 720 resolution. It also has a 40 GB hard drive, 5 channel amplifier, Bluetooth, GPS, and is compatible with the iPod and the iPhone.

The second is the CY-BB1000D, and you need to hook it up with the HX3000D to make it work, apparently. My source is a little vague on that point, but it says that the BB1000D doesn’t support Blu-Live. This is one of the “let the buyer beware” purchases.

So, if you are type that is really into Blu-ray, so much that you need it in your car, then (do I need to say it?) this product is for you. You will have to wait until the fall to purchase them, but my source does not have a price.