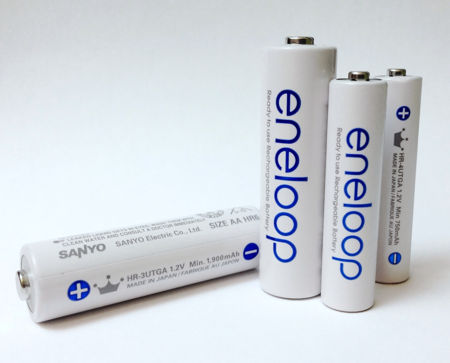 There was a time when many products, especially in the world of consumer electronics, ran on batteries – the AA and AAA types. Of course, the Nintendo Game Boy proved to be one of those devices that have “gobbled” up its fair share of batteries in the past, and rechargeables were obviously highly recommended for economical reasons – not to mention to reduce the amount of space required in our landfills, too. Panasonic of Japan has also come up with its eneloop range that has been successful, so much so that the 10-year anniversary of the eneloop Nickel Metal Hydride (Ni-MH) battery has been announced.

From the middle of this month onwards, Panasonic will start to ship their revised eneloop products which are touted to be able to maintain a cool 70% of its power for up to 10 years, even when it remains unused and is of course, stored properly. eneloop batteries were universally praised when released in 2005, targeting those who require long-life batteries, such as outdoor enthusiasts, digital device aficionados, and homeowners assembling storm preparation kits.

Yoji Takagi, Sales and Marketing Director, Consumer Products Division, Panasonic Energy Corporation of America, shared, “Our eneloop batteries have delivered industry leading technology for ten years. eneloop batteries, used to power all types of household devices, can be stored with even greater confidence, delivering up to 70% power, even after 10 years, when unused and stored properly. You can purchase these battery cells today and conveniently store them until they are ready to use.”

Some of the key benefits of eneloop rechargeable batteries which might convince you to pick up a set would include its ability to be recharged (used over and over) up to 2100 times, and this is made possible thanks to improvements which have been made to the conductive surface of the active, or positive, electrode material produce greater conductivity and durability. It has also been pre-charged at the factory using solar power, which means it is ready to use. In fact, eneloops are so versatile, they can be used in temperatures down to minus 4 degrees Fahrenheit, and deliver up to 2000mAh (AA) and 800mAh (AAA) of power.

Expect the new eneloop and eneloop Pro to arrive in both AA and AAA battery sizes, and there are also C and D size adapters for sale.