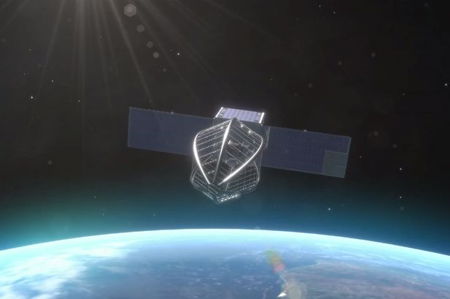 It looks like ‘Pac-Man’ is going to have a very different diet from now on, there will no longer be fruits like watermelons and cherries, and neither will there be pills or ghosts to devour, but rather, ‘Pac-Man’ is set to eat debris that is orbiting the earth. Such debris are considered to be anathema most of the time, since they carry the risk of damaging satellites as well as space rockets, so hopefully, this will be a solution for the ages.

Engineers have managed to come up with what they deem to be a giant ‘Pac-Man’, where it has just one main function – that is, to capture space junk and to clear it from the Earth’s orbit. I know that our oceans are polluted enough for Adidas to use recycled ocean junk to make sneakers from it, but there is also a whole lot of debris in space as well, comprising of broken satellites, rockets and other stuff that man has left behind, and these tend to circle the planet at a very high speed, posing a danger to satellites, spacecraft and folks who earn a livelihood in space.

Certainly, this unique space junk ‘eater’ is not yellow in color, and it is officially known as the Clean Space One Project. The Clean Space One Project hails from the Swiss technical university EPFL, where they have been on the lookout for a growing number of options when it comes to cleaning up the cosmic rubbish. Given the nickname the ‘Pac-Man solution’, its first mission is to capture a tiny satellite known as SwissCube, before bringing it to the Earth’s atmosphere for it to burn up.

This tiny cleanup satellite will work by deploying a conical net, where said net is used to capture the Swiss Cube before both of them end up in a burning embrace. It is set to launch into space some time in 2018.