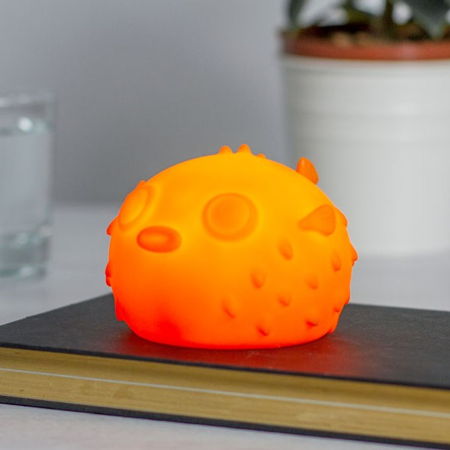 There are many mysteries of the deep that we have yet to discover for ourselves, and the richness of the seas have proven time and again that there are ungainly creatures which rule the depths of the oceans in their very own way. For instance, there is the angler fish which is terribly ugly to look at, and yet it is capable of luring its prey within chomping distance with its light-up lure. Well, the £9.99 Pablo the Pufferfish Nightlight might not be a glowfish of any sort, but it is still cute, going down the same road as its predecessors, such as Mari the Narwal Nightlight.

Pablo the Pufferfish Nightlight allows one to bask in the powerful yet soothing glow of an infant sea creature, although you do not have to be worried to death about being poisoned by pufferfish toxin. It is, after all, powered by batteries, allowing you to pop him just about anywhere that requires some light. Not only that, it makes the assumption that most folks and children would have fallen asleep an hour after being tucked into bed, which is why it automatically turns off after one hour in order to conserve energy. It would be best to rely on rechargeable batteries, since Pablo the Pufferfish Nightlight runs on a trio of AAA batteries with an LED lifetime of 100,000 hours.