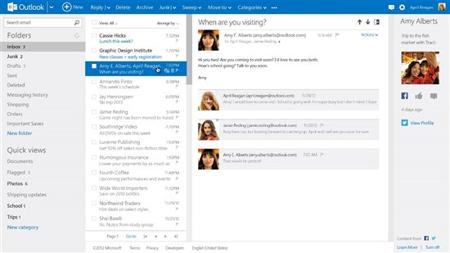 Do you remember when web email kicked off in the early days of dial up connectivity? Yes sir, everyone wanted and rushed for an email address, and the younger (and more foolish, I might add) ones among us realized that all of the cool email usernames were already taken, leaving us to agree to whatever the machine’s reasoning threw our way, such as [email protected] or [email protected], where they all sound so wrong on different levels in this day and age. Embarrassing, even. Well, having said that, perhaps it might have been half a decade since you decided to log into your Hotmail account, but you might want to do so soon, as Microsoft has officially launched Outlook.com on Tuesday, which would mark the demise of its predecessor, Hotmail.

Yes sir, a minute of silence for the faithful departed please. Taking approximately 7 months after Microsoft unveiled a preview of the Outlook email service, the software giant decided to announced the end of its beta run over in a blog post. Having picked up Hotmail in 1997 (was it that long ago?), Microsoft claimed that they will switch users from Hotmail over to the new Outlook service “soon”, but it is a good thing that the Redmond, Washington company will not force these affected users to change their emails to an “outlook.com” address.

Be warned, though, change is definitely coming later this summer, so you might want to mentally prepare yourself for a jump over to the Outlook bandwagon after being in love with Hotmail for so long. Microsoft said, “Everything from their @hotmail.com email address, password, messages, folders, contacts, rules, vaation replies, etc. will stay the same, with no disruption in service.” With over 60 million folks who are actively using Outlook.com, hey, we certainly cannot argue with such levels of approval, can we? Do you think you will miss Hotmail?

1 thought on “Outlook.com is now official”