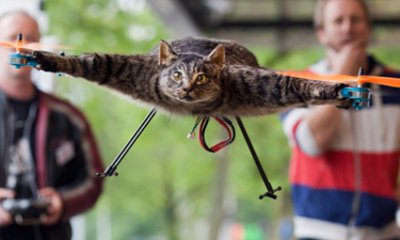 Dead men tell no tales, but what about dead cats? Why, some people say that a grieving heart can drive you to do something crazy, and perhaps Dutch artist Bart Jansen had his heart torn into pieces when his pet cat was killed by a car, hence causing him to use the carcass of his cat and turn it into a piece of techno-zombie artwork. A flying cat is what you are looking at here, and since the cat was named Orville after the pioneering aviator Orville Wright, why not turn Orville’s body into a tribute to the wonders of flight?
Bart’s work on Orville has resulted it being transformed into the Orvillecopter, being part cat, part machine, and has tiny propellers attached to each of its four paws. Bart concedes that it is rather difficult to get Orville to “fly” properly in a steady manner, but that is an issue that he has promised to fix in due time. Hopefully Orville will be on the receiving end of more powerful engines and larger propellers in due time.
Source