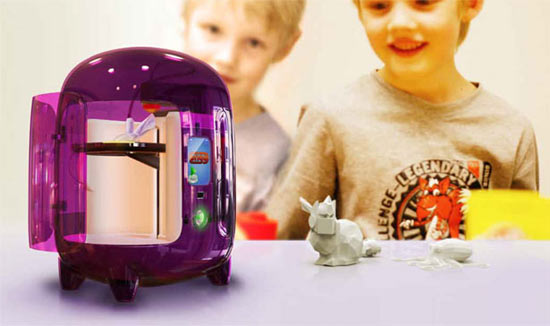 In the future, every household will have a 3D printer like they have a 2D printer. You will note that I didn’t put a year on this, because I’m not stupid. Every time I read a sentence that starts with “by the year” it hardly ever comes true.
However, this Origo 3D printer could bring 3D printers into households sooner than later. The Origo is currently a concept from designers Artur Tchoukanov and Joris Peels, and it can turn any drawing into a 3D object.
I have no idea how it can translate a 2D drawing into a 3D figure, but here is the real cool feature of the Origo. After a child has created his or her toy, he or she can recycle the material and make another toy.
This 3D printer will be very simple to use as the Nintendo Wii or the Xbox 360. While we are on the subject of the Xbox 360, you should know that this thing is “as big as three Xbox 360s and as expensive as three Xbox 360s”.
It is an odd size and price comparison, but I still believe that the Origo is the future. I can imagine that they will be available in many colors by the time they will be sitting on the shelves at Wal-Mart.
Source