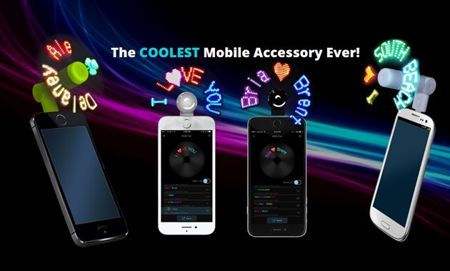 When it comes to snapping selfies, this is one trend in which just about everyone has taken to and with great enthusiasm. After all, we have seen an explosion in selfies and wefies (a group selfie) over the years through social media and instant messaging apps, and with the continued advancement of lens technology in our smartphones, things do look set to continue moving forward in the right direction. For fashionistas and divas who would like to capture that model look with hair flying to the back due to a gentle breeze, a selfie fan is just the thing you need. However, why settle for a regular selfie fan when you can have the Original Selfie Fan?

This Original Selfie Fan offers far more than just the capability of a regular selfie fan: it comes with the ability to throw in self-programmable LED messages into the mix. This is the next evolution of souvenir and novelty LED message mobile fan accessories which right now are pre-programmed, and is expected to be all the rage when it hits retail stores later this coming summer.

Businessman and entrepreneur Rich Butler said, “Our Selfie Fan with LED Text Messages is the coolest mobile accessory ever. And now, with the help of Kickstarter backers and supporters, we’ll be able to deliver the world’s first Self-Programmable Selfie Fan allowing the user to download an app to their iOS or Android (OTG) device and then customize their very own illuminated messages over and over again.”

The Original Selfie Fan will allow users to tell the world exactly what’s on their mind, their thoughts and feelings, as well as an avenue to express their emotions while keeping cool with this uniquely clever mobile device. It can be used for virtually any occasion: be it at a concert, a ballgame, at the nightclub, a casino, rave, festival, bar, restaurant, while one is traveling via air, among others. It will be accompanied by a clever 2-in-1 connector, with a swivel feature, an on/off button, and a powerful yet quiet motor with safe vinyl blades. One can choose from up to seven LED colors, up to 16 characters per message, graphics and emojis, with the ability to modify, store, and replace messages as often as they like.