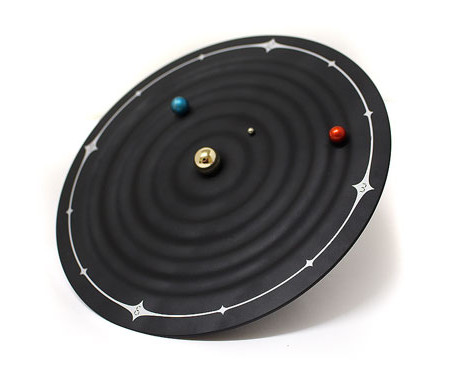 Telling the time can be done in various ways, and most of the time, we tend to take a quick look at the computer’s clock on the screen, and at other times, it would be the smartphone that would inform us of the current time. The wall clock? That’s so passe, and more often than not, it would be more of a piece of decoration than anything else. Having said that, the £19.95 Orbit Planet Clock might just help you make a decision in brightening up the surrounding area, and it could even be part of your home remodeling plans.

After all, time does revolve around the sun – in one way or another, which is why we end up with 365 and a quarter days in a year. It does not matter whether you are a keen astronomer or a celestial novice, the Orbit Planet Clock is one cool looking timepiece to have on parade – whether you are at home, or be it at the office. Specially designed to look like that of the solar system somewhat, it will feature a trio of planets that will revolve around the sun, and several magnetic fields that are shown in the backdrop. It is rubber coated, so no worries about the rotating planets scratching the surface as they persist on their travels in, er, clockwork precision.