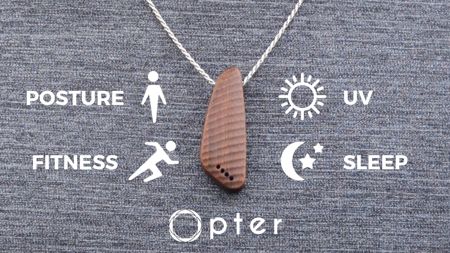 Wearable technology has been rather limited in its functionality and form factor for two obvious reasons: a whole lot of things that the average smartphone is able to deliver, and also the lack of a powerful battery in a small form factor to deliver a multi-functional wearable device. The Opter Pose would like to offer a new take on the wearable technology market, being a brand new smart necklace that will launch as an Indiegogo project this October 3rd. The Opter Pose prides itself in being a fashionable alternative to the basic plastic wristband, so much so that Forbes has even deemed it to be “the new must-have in wearable tech.”

The Opter Pose comes across as a designer unisex necklace and clip, where it will be able to vibrate gently should you be slouching for a far longer period than you are supposed to, being a good reminder for you to remain confident while standing tall. Being different from other kinds of posture-correcting devices, the Opter Pose boasts of a battery life that is able to go beyond the seven day period, now how about that for longevity? Not only that, it also features a bunch of other functions that can be accessed via its companion smartphone app.

UV sensing capability will let it monitor the amount of time spent in the sun, while the presence of blue light sensing enables it to recommend different light levels so that you can be at your productive best all day round, as well as getting the right kind of sleep quality. Other that that, it is also able to track your steps, amount of exercise taken in, and sleep quality, helping to reduce sedentary time by intelligently reminding you to move if you’ve been still for too long. It should retail for $120 when released commercially.