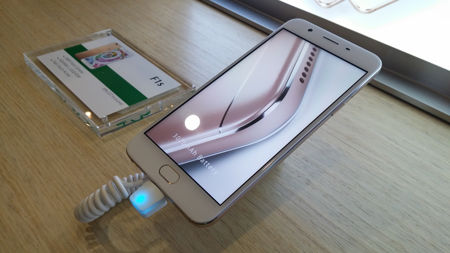 OPPO is a company from China that has more or less streamlined its products to focus on one particular aspect in smartphone photography that has taken the world by storm — that of selfies. After all, selfies are big thanks to the prevalence of social media accessibility and ever more affordable mobile data rates. The OPPO F1s has just been launched which will be the latest member that will be part of the Selfie Expert range.

Similar to its predecessor, the OPPO F1, it will retail for $300 a pop, and arrives with improvements in the selfie department (obviously), not to mention other hardware upgrades along the way. At the back of the OPPO F1s lies a 13MP camera, while the front will feature a speedy fingerprint reader, although when I tested it out at the Experience Zone, it took quite a while to register my fingerprint immediately. Perhaps there are niggling issues that need to be worked out first.

Other hardware specifications include a generous 3,075mAh battery that ought to have been all right to last the whole day — before the advent of Pokemon Go, of course, 3GB of RAM, 32GB of internal memory, and a triple-slot card which will let you stash up to a pair of 4G SIM cards and a solitary microSD memory card of up to 128GB.

As for the 16MP Beautify camera that is in front, it will be powered by a Sony 1/3.1-inch sensor and large f/2.0 aperture, which should be able to deliver high dynamic range and minimize noise. The beauty function looks too surreal, and it would be best to be avoided at the maximum scale (1 to 7). There is the advantage of the Screen Flash function, which will dynamically adjust itself to compensate for current light conditions, so that great selfies can be captured in low light conditions.

Both the front and back cameras will boast of Sony sensors, and the octa-core chipset hails from MediaTek, although there were no specifics provided. The OPPO F1s will be powered by its very own ColorOS 3.0 that runs on top of Android 5.1 Lollipop, although when approached, one of the OPPO staff mentioned that the OPPO F1s will soon obtain its Android 6.0 Marshmallow upgrade by the end of the year. It does not look as though it will make the jump to the Android 7.0 Nougat bandwagon, however.

All in all, the OPPO F1s is a decent mid-range handset, but to call it a “selfie expert” with its selfie results might be stretching the truth a bit too far.