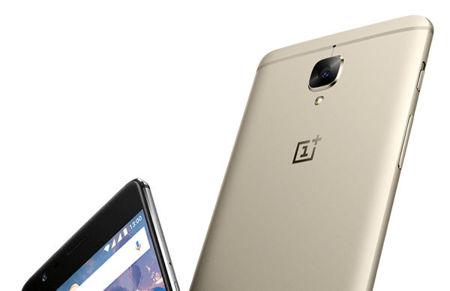 When the original OnePlus smartphone hit the market a couple of years ago, it certainly made a splash for itself for the invite system in which it was ‘sold’, as well as the kind of hardware specifications that come with it that caused you to carve out a big smile on your face, since you got plenty of bang for your hard earned buck. Well, fast forward a couple of years later, this latest flagship killer of a smartphone is now in its third iteration, and the OnePlus 3 is all set to light the stage with the Soft Gold Luxury Edition that will keep the vanilla Graphite version company.

This latest color variant would mean that you will now be able to tote around the OnePlus 3 in style while your friends whip out their respective Rose Gold colored handsets from their pockets. It is not the standard gaudy gold smartphone, this, as the color itself has been toned down for a light, elegant look. Apart from that, OnePlus wants to complement this more low-profile take on gold, by going ahead with a subtle texture reminiscent of holding fine, silky-soft sand. Just drooling over the images and press shots will not be enough, as you would do well to experience the OnePlus 3 Soft Gold for yourself.

If you are wondering just how you will be able to get hold of the new OnePlus 3 in a shade of Soft Gold, then those living in the US are already able to enjoy it from July 26 onward via an online order. As for the other regions around the world — meaning Europe, Hong Kong and Canada, you can pick it up from August 1 onward.

As for the hardware specifications underneath the hood, you will find that the Soft Gold version of this flagship device will carry the very same innards, so you need not have to fret over its performance (or lack of it). Best of all is, it is touted to retail for the same price point, too.