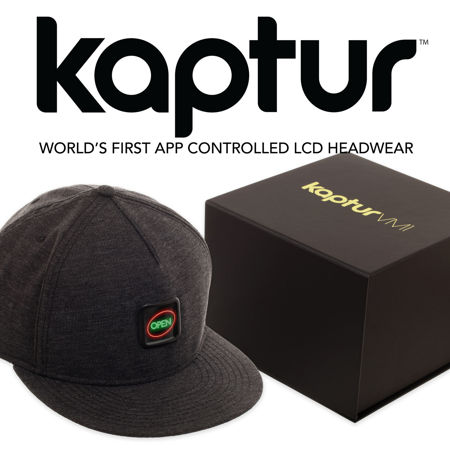 With so many different kinds of devices and items sporting Internet of Things (IoT) capability these days, one can only wonder just what other kinds of things around the home that will embrace the “smart” prefix in its name. One61 Studio has just the thing, a smart hat, that will not only make the wearer look fashionable, but also be able to remain connected to a certain degree as well. Enter the Kaptur Smart Hat, which is the first Bluetooth enabled, LCD hat with mobile app and a rechargeable battery to boot.

This is one smart hat that will be able to provide the wearer with a whole new level of individualism through uploaded images, GIFs and memes. This web-connected hat will boast of an LCD display that allows users to show off their favorite GIFs, short videos as well as memes. Specially developed by Bioworld’s new technology division, One61 Studio, the Kaptur Smart Hat will play nice with just about any kind of smartphone as long as there is a Bluetooth connection. Wearers will be able to upload their favorite media, drawing from a library of self-created content, or even making use of content that they have downloaded or socially shared.

One61 Studio has also worked with mobile app developers and technology startups such as SAY Wearables, resulting in the app and screen components for the Kaptur Smart Hat. This particular app makes it easy to manage images, churn out animated GIFs from short videos, as well as tag content using the opt-in feature in order for users to socially share their selections with other Kaptur wearers. This is somewhat similar to a ‘playlist’ for music. Production of the Kaptur Smart Hat is expected to commence later this year, with the final product being tipped for an August 2018 rollout. Any takers?