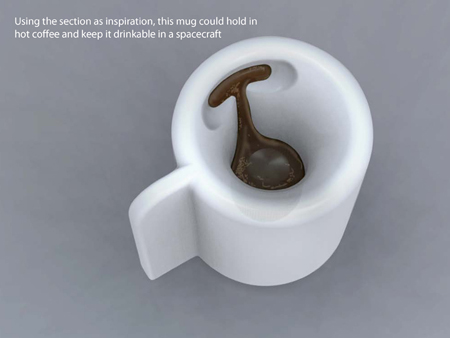 It’s not uncommon to see designers pushing the barriers of design, to see what they can come up with.  A lot of times it’s with luxurious items that even if they became available the general public, it wouldn’t benefit them.  With this new design, it’s highly possible the general public won’t benefit, but you have to appreciate the designer looking out for those in zero gravity conditions.  It’s pretty obvious that any liquid would be difficult to deal with in zero gravity, well with this mug astronauts could ditch the heated aluminum bags and straws and drink coffee like it was meant to be.

The designer is technically Travis Baldwin, however, it comes straight from the brain of Donald Petit who was an astronaut during the mission STS-126.  Travis Baldwin offered up his services to help turn the design into an actual product.  By giving astronauts back one of the luxuries they give up while in a spacecraft, that luxury being their morning cup of joe.  They admit that it is difficult to predict how the cup would fair in zero gravity, but it should work.  The coffee is held by surface tension in the narrow bottom of the cup, the deep groove then acts as a wick that draws liquid up as it is removed.  The lip depression should hold the bead of the coffee in place at the top of the groove.  The entire thing features thin walls making it possible for this to be made out of disposable materials.