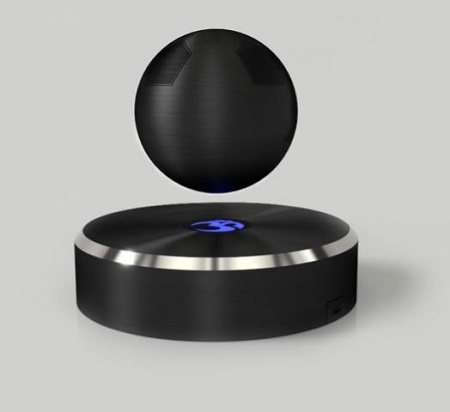 For those who happen to love different kinds of audio products, here is something that you might want consider the next time you are in the market for a Bluetooth speaker. After all, not all Bluetooth speakers are created equal – and here we are with the OM/ONE Bluetooth speaker, which is the first levitating Bluetooth speaker of its kind in the world. Pre-sales of it has been announced, after having raised more than $800,000 in its crowdfunding campaign, taking less than eight weeks to do so.

For those who would want to have it delivered to you in time for the holidays, you can place a pre-order for the OM/ONE before October 29th – and also to be on the receiving end of free domestic shipping to boot. Right now, the OM/ONE levitating Bluetooth speaker happens to be available for pre-order in the black or white edition, and it will be 100% portable thanks to an internal lithium-ion battery which is capable of lasting up to a whopping 15 hours. As a listener, all that you need to do is to pair it up with any Bluetooth device out there for instant music streaming.

In addition, listeners are able to stream music from apps including the likes of Pandora, Spotify, Rdio, Beats Music, and Slacker, among others. David DeVillez, Founder and CEO at OM Audio, shared, “We have been overwhelmed with support and positive feedback from our community and have worked around the clock to be sure we can get OM/ONE into the hands of our supporters in time for the holidays. Thanks to the support, we’ve created a listening experience that’s sure to turn heads.”

The OM/ONE is capable of outputting a full 110 decibels thanks to its 3-watt RMS amplifier. Also, the OM/ONE will boast of an industry leading battery life without having to sacrifice any kind of audio performance. Listeners will be able to enjoy the OM/ONE by itself, or to have it pair up with another OM/ONE model so that your ears get to enjoy true stereo sound. A single button would allow you to have it power on/off, pair/dis-pair and answer call/hang-up. Expect to fork out $199 for the OM/ONE on pre-sale, where you can also pair up a couple of OM/ONEs for $398.