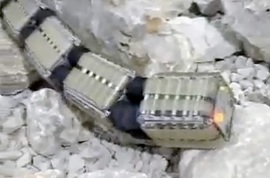 I’m not certain what it is, but there is a lot of cool robot stuff happening today. First the JO-ZERO, the Remo, and now the OmniTread.

The OmniTread isn’t a humanoid robot, and it isn’t a kit that you can special order just yet. The OmniTread is the work of some developers at the University of Michigan, and it is designed for some very rugged work.

As you can see in the video (after the jump), you will note that the design of the OmniTread resembles that of a train. The serpentine robot has treads on all four sides of its segments, and pneumatic bellows that can lift itself up like a caterpillar.

Right now, the developers at the University of Michigan have two models of the OmniTread. One of them, the OT-4, is named because it has the ability to crawl through a small hole only four inches in diameter. Their experiments show them working with an Omnitread with an AC cord, but they do have a working model that is good for 75 hours worth of use with the help of some battery power.

The uses of the OmniTread are similar to the robo hummingbird that we reported on a few days ago. It is a machine that can go to places that we cannot, such as a collapsed building or cave-in. Just imagine having a durable camera mounted on the front of this guy, and you’ll see what I mean.

I wouldn’t be surprised if we see the OmniTread at work on the job in the near future. In fact, my source claims it was “ready to be deployed at a moment’s notice” for a quake that recently occurred in San Diego, but I couldn’t find a secondary source to back this up. Until then, let’s just assume that the OmniTread is just concept tech.