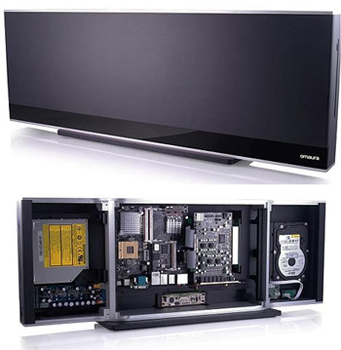 Everything is mounted very nicely behind this large, slim case in order to keep things looking sleek. While there aren’t any official specs, it looks like it has everything you’ll need, includeing a TV tuner and a slim optical drive. The only thing that concerns me is that the motherboard looks to be a little dated. The CPU socket is a dead giveaway. Thankfully most HTPCs don’t really need a lot of processing power.

Really, this would only leave my Xbox 360 with no home. Now if someone would just come up with a really sleek way to wall-mount it, I’d be all set. There’s currently no word on pricing or availability, though I would imagine Omaura will have it added to their website before long.