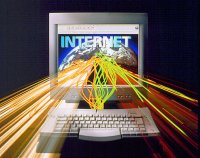 Looks like there is still some life left in the old analog TV broadcast system as a group of high-powered technology companies in the US learn to take advantage of it, revamping it into a nationwide high-speed wireless Internet network. Sounds pretty much like a Cinderella or Ugly Duckling story, doesn’t it? Well the future is not very far off from here, with the coalition having developed a device that is capable of taking a portion of the old TV transmission system, broadcasting high-speed Internet signals through it to people living in the US. What’s more, this technology could eventually be deployed in the Great White North, and perhaps in due time all over the world. It would even work in places where great outdoor TV antennas fail to deliver a tolerable signal.

According to Scott Blake Harries, a spokesman for the group behind the technology, he mentioned “as a technical matter, absolutely. As a regulatory matter, it all depends on your regulations.” This group is known as the White Space Coalition and they are currently working on getting its technology approved by the Federal Communications Commission (FCC) for use in the US. It is hoped that this ‘recycling’ effort of sorts will be able to start selling as soon as the old analog TV system there is turned off in 2009 where high definition signals will then rule.

As for Canada, the country will only disable its analog TV system a couple of years after the US does so. Interested parties would feel safer knowing that companies like Microsoft Corp., Google Inc., Dell Computer Inc., the Hewlett Packard Co. and Philips Electronics North America Corp. have already jumped onto the bandwagon, so it would be pretty hard to say that there might be a possible lack of support in the future. Initial reports have shown that download speeds could touch 80Mbps – that’s approximately 8 times faster than most high-speed Internet accounts found in homes these days. Neat!