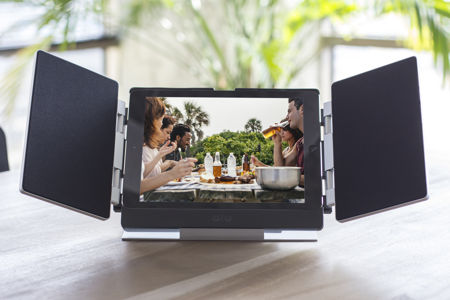 The idea of tablets being used as a portable media player is not new at all, but then again, neither is it something which is all the craze these days. The tablet market has definitely been on a decline, if slightly, in recent times, and it does not look as though it is going to pick up anytime soon either. This does not mean that there is no money to be made where tablet accessories are concerned, since there is still a sizeable market out there. However, the choice of accessories would certainly come under scrutiny, since there is plenty to look forward to if you are going to kit out your tablet — or iPad in particular, with a speaker case. Yes, you read that right — a speaker case, which is something that does not arrive every other day.

OIO is an independent startup and innovator in portable tech products and audio solutions, having announced Amp, which is an ultra-portable iPad speaker case for the iPad Air, iPad Air 2 and iPad Pro 9.7. Amp happens to be the only integrated surround sound theater system of its sort, sporting symmetrically positioned right and left channels in order to deliver a true stereo sound theater experience with your iPad.

Amp’s high end stereo sound will include a couple of ultra-low profile electromagnetic exciters, multiple audio codecs (A2dP), and a pair of resin fiber honeycomb acoustic panels which are covered with microfiber optical quality fabric. This kind of portability ensures that the Amp makes for a great traveling companion as it delivers high quality entertainment anywhere in a sleek protective case.

The lightweight speaker case is compact, highly durable, and versatile, where its folding speakers will close over the iPad. Not only that, its stand will fold back behind the case, resulting in a theater experience that goes just about anywhere. The initial round of mass production is already underway, where it is tipped to ship later this month for $249 a pop.