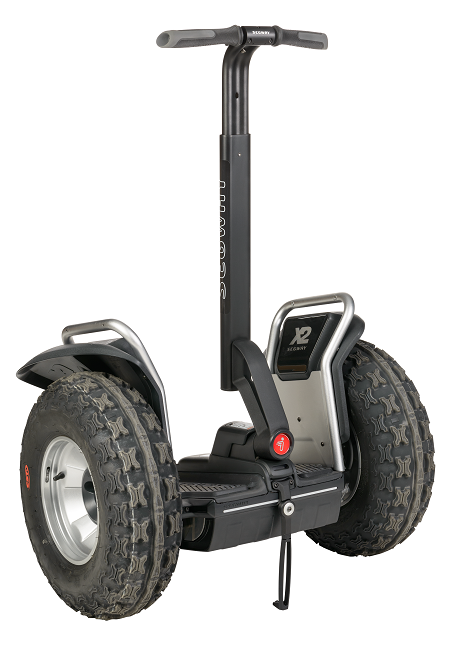 Once upon a time, Segways were seen as something one would only find in a futuristic setting, and now it seems as though they’re everywhere. Segway tours are rising in popularity, and environmentally conscious people are buying them as an alternative to cars for short trips. However, most Segways are limited to flat, urbanized terrain, which can be a disadvantage for those looking to expand where they can take their machines to get their money’s worth.

A model released on the Segway Los Angeles site may be what those off-roading Segway-ists are looking for. Constructed with a wider base, higher ground clearance and just a bit more weight, the Segway X2 SE model weighs in at 120lbs and a width of 21″ x 33″. Equipped with deep tread tires, this Segway model makes traveling off road easier than on more traditional Segway models. However, because of the thickness of the tires, the added weight, and the potential terrain that can be navigated, the X2 SE has half the average range of most other segways at only 12 miles.

The X2 SE is approved for up to 260lbs of rider weight and comes with the aforementioned deep tread tires, as well as lithium batteries that can be charged in any wall outlet. As with most other segway models, this one requires deep pockets, and can be purchased off of Segway Los Angeles site for $6,999. Who’s on the hype train to off-road on this bad boy?

Available for purchase on segway