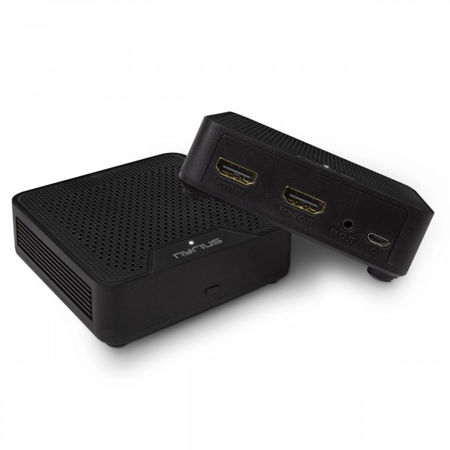 Nyrius might not be a name that we are familiar with, although your view might change after reading this. They happen to be innovators of convenient connected home devices, and have recently announced the availability of its latest wireless home entertainment solution that is known as the WS54 HD Video Transmitter and Receiver. What is the WS54 capable of doing? For starters, it enables users to transmit true 1080p HD video content from streaming devices, which will include the likes of the Apple TV or Roku, or from cable boxes, Blu-ray players or computers, to just about anywhere else in the home without having to be constrained by wires and walls.

The Nyrius WS54 will be a plug-and-play device, where it takes advantage of a powerful long range digital signal in order to stream content, from up to 60 feet, and it also does so at high speeds and with low latency. This will enable users to watch their favorite Netflix show or offline media catalogue in High Definition glory, razor sharp quality, without interruption or interference from other Bluetooth or WiFi devices in the home.

The convenient Nyrius WS54 also sports a loop-through wired HDMI output feature that allows users the freedom to stream the same content at the same time in two different locations simultaneously, with one being wired and the other being wireless. For instance, users are able to view a movie in their bedroom and wirelessly stream that very same content to a different room in the house, such as the living room.

The WS54 will also be accompanied by an IR extender, and it enables users to control their media device from any room with a receiver. Users can then change channels, pause/play content, and adjust the volume in their bedroom using their remote control, even if their cable box is located in their living room. Expect the WS54 to be made available for $169.99 a pop if you are interested.