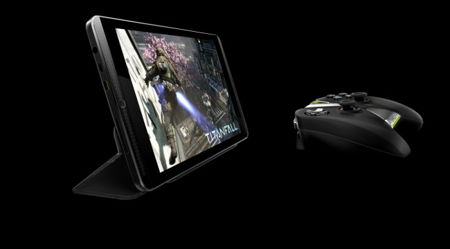 Our previous exposure to the NVIDIA SHIELD brand was that of it being touted to be a “portable Xbox”, although in reality, it did not seem as though the device was being shaped in such a direction despite the intention of looking like it. This time around, the NVIDIA SHIELD brand is still being used, except that it will focus on the tablet form factor, now how about that? It certainly looks as though this is the next generation tablet that boasts of superior hardware specifications in terms of gaming capability.

The NVIDIA SHIELD tablet will arrive with a slew of features and capabilities that would certainly make you green with envy. At its heart lies a Tegra K1 mobile processor, which is touted to be the world’s most advanced mobile processor. When paired alongside a brilliant 8-inch, full HD display, your eyes will be able to experience visuals that are unprecedented at insane frame rates. In fact, your movie watching experience will not be the same again with 1080p Netflix streaming on the NVIDIA SHIELD tablet.

Ditching conventional wisdom of not having a stylus, the NVIDIA SHIELD tablet does have its very own stylus that has been holstered in the back, ensuring that it remains within easy reach all the time. Thanks to NVIDIA’s DirectStylus 2 technology, this particular move will open up new possibilities for everyone ranging from note takers to serious artists to take advantage of it. The NVIDIA Dabbler app will even assist you in creating hyper-realistic images while you are on the move.

Fully running on the Android platform, the NVIDIA SHIELD tablet has a microSD memory card slot to deliver another 128GB of storage space, and it receives over-the-air updates directly from NVIDIA. Not only that, it will also play nice with apps from Google Play, while the LTE option would bring a smile to the face of many. Expect the Tegra K1’s 192 dedicated graphics cores inside to deliver the best visuals for a tablet, and to make sure your mobile gaming experience is complete, it even works alongside a new wireless controller. The NVIDIA SHIELD tablet will start from $299 onward.