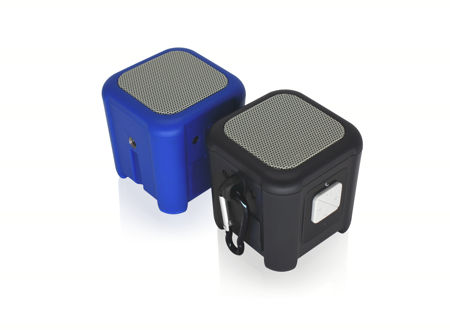 Music can be extremely soothing to the soul, and this is a fact. After all, over the centuries, we have seen (or rather, heard) how music has been able to calm people down, or even inspire them to do more than what they thought they were capable of in the first place. Hence, sharing your favorite tunes that inspire you to the next level is somewhat akin to sharing good news – although doing so with a pair of headphones can be deemed to be unhygienic by some people, while it can be pretty tricky trying to select the right kind of portable speakers to get the job done. Well, if you are going to go for a portable speaker solution, why not go the whole nine yards and make sure it is waterproof as well? NUU intends to offer a solution in this space, having announced the launch of the Riptide.

The NUU Riptide happens to be a 2.7” cube speaker which certainly offers performance that is above and beyond what a speaker of its size is normally capable of. Here is a classic case of an adaptation of the proverb, “do not judge a book by its cover”. The Riptide will be able to deliver top-notch audio while being built for any adventure.

Boasting of a small size and lightweight design, users will then be bring their favorite tunes with them regardless of where they go – within reasonable means, of course, as you certainly won’t be able to bring the Riptide with you when you go scuba diving, as it offers up to half a dozen hours of playtime. Sporting a built-in carabiner and universal mounting capabilities, the Riptide is able to be attached with ease to just about anything, including a belt loop, backpack, kayak or even a sailboat.

It conforms to the IP57 testing, and can be completely submerged in up to 3 feet of water, while being buoyant alongside offering protection against sand. There is a 3W neodymium driver underneath the hood that works in tandem with a passive bass radiator, while the speakerphone feature could come in handy as it works in tandem with the built-in, waterproof and noise-cancelling microphone. All for $49.99 a pop, the Riptide is starting to look like a bargain from all angles.