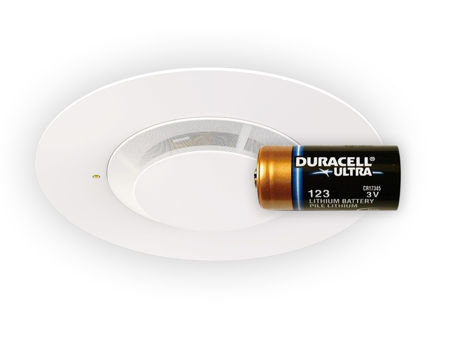 Fires are not to be trifled with, regardless of whether it is at home or elsewhere. A fire can start from many different sources, and with the right conditions all around, it can spread swiftly and burn down the entire building — often leading to loss of life as well. Well, this makes having a fire alarm system in your home all the more important, which will include a smoke detector. For the perfectionists out there, if you have given a hand at redecorating a room before, surely you would have had a headache when it comes to ensuring that the smoke alarm blends in with the rest of the design. Well, not so with the NotaFire Pro smart smoke alarm.

The NotaFire Pro smart smoke alarm is close to being invisible, where it measures all of just 4.3 inches (110 mm) in diameter, and will protrude less than a quarter of an inch (6 mm) from the ceiling. This makes it very difficult to notice at first glance, and even if you are looking for it, it might take a while before it registers in your brain since it is nothing like that of a conventional smoke alarm.

The NotaFire Pro will bring together cutting-edge technology alongside almost invisible design (patent pending), and yet does not compromise on your safety since it relies on not a couple or three, but five sensors that should be able to detect just about any fire-related emergencies in the vicinity — whether it be from smoldering fires to fast burning fires and Carbon Monoxide. It is also smart by being network-ready; as it supports WiFi, Z-Wave and IFTT connections which should allow it to integrate seamlessly into your smarthome system.

It even comes with its very own app that will notify you in the event of an emergency, as well as an image of the triggered area courtesy of its built-in camera. Whenever the battery starts to run low, you will also be informed via the app. Pretty cool, yes?