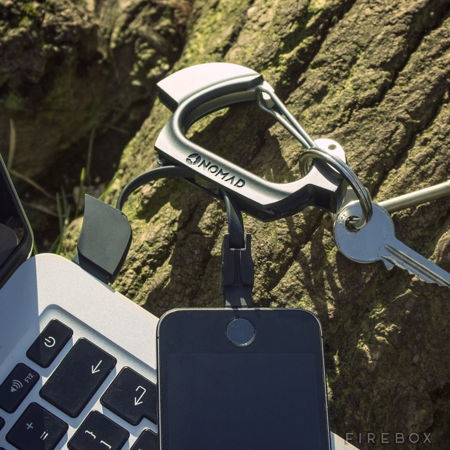 When we make a reference to a carabiner, most of the time it would be a metal contraption that we use to hook up other stuff to it, while those who indulge in rock climbing will also be able to identify with how useful a carabiner can be. Well, here is a carabiner that offers more than just letting you hook up your pair of shoes to your rugged backpack – the £29.99 Nomadclip Carabiner Cable happens to also be a rugged charging cable that has been specially designed to cater to your active lifestyle.

It is no doubt made from durable engineering-grade polycarbonate in order to last as long as possible, and if there is one particular “record” that it can lay claim to, it would be the fact that this is the first carabiner that will come with a built-in charging cable. One will be able to choose from either a Lightning cable or Micro USB, depending on which kind of smartphone you carry around. Thanks to the clever carabiner form-factor, it is extremely versatile, hence you do not need to make extra room for it, since it will always remain clipped.