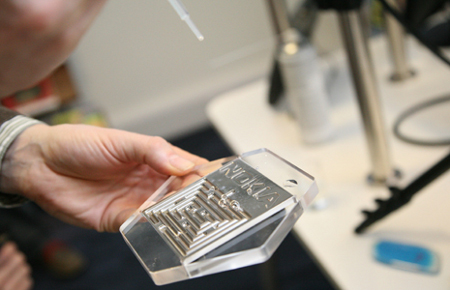 Have you ever noticed drops of water that falls onto most leaves? That drop will not hang around there (unless the leaf is formed in such a way that the water cannot subject itself to the law of gravity and flow down to the ground, but remains as a puddle), which means the leaf itself is water repellant. Boffins over at the Nokia Research Center in Cambridge have reason to optimistically believe that they might just be able to replicate a similar effect on your phone, thanks to the wonders of nanotechnology.
According to Chris Bower, the Principal Scientist at the NRC in Cambridge, “Like many scientists we are trying to copy what nature has been doing perfectly for thousands of years.” Just how are they going to achieve this vision? For starters, the team at NRC are currently in the last stages of working out a Superhydrophobic coating that will be applied to the outside of a smartphone.

Does this mean we will eventually end up with waterproof handsets being the norm? Not really, as if you submerge a phone without all of its holes and openings sealed against water, it will still go inside and wreak havoc on the electronics. However, assuming it rains and you cannot find a shelter anytime soon, at least all the rain water will run off your phone, at least leaving only you wet.
I guess the experience is somewhat similar to those using a Teflon non-stick frying pan, where it has a hydrophobic coating, but we are talking about a superhydrophobic coating here that adds a nanostructure to trap a layer of air over the surface, making sure that not a single drop of water will ever reach it. Chris Bower proceeded to demonstrate this breakthrough by using a couple of hand-held Nokia maze tiles, where after dropping water on a surface that has no coating at all, says, “The water spreads, like this, and coats the surface.” When repeated with the maze of ordinary hydrophobic coating, the water will retain its form, allowing you to guide it. As for the maze with a superhydrophobic coating, the water drops and nearly bounces up, beading tightly together – followed by a quick skid over the surface.
Press Release