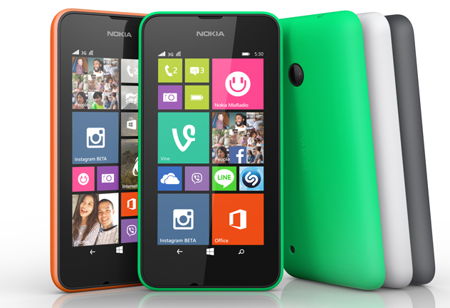 Have you jumped aboard the Windows Phone bandwagon already? If you are thinking of making the jump and yet are a little tight on your purse strings, there is something mid -range from the folks over at Nokia, and that would be the Nokia Lumia 530 which runs on Windows Phone 8.1 Of course, we have seen other Lumia handsets in the last like the Nokia Lumia 635, and with the Lumia 530, it intends to act as a bridge for the masses to make the jump over to Microsoft’s mobile platform.

It is said that the Lumia 530 is more than capable of impressing right out of the box courtesy of Windows Phone 8.1 running. Users will be able to enjoy great features such as Action Center, Word Flow, Cortana (as and where available) and personalized Start screen backgrounds which everyone can enjoy.

Underneath the hood, you will find that the Lumia 530 runs on a quad-core 1.2GHz Qualcomm Snapdragon processor that ought to deliver blazing fast performance at its price, delivering a lag-free experience regardless of whether you are surfing the Internet, using your favorite apps, or playing some games, enjoying all that the 4-inch LCD display is capable of offering.

Apart from that, all of the classic Microsoft apps including Word, Excel, and PowerPoint have been packaged in the form of Microsoft Office, allowing you to bring it with you wherever you go. With the power of the cloud, any kind of new document that you create or existing document you edit will be synchronized automatically, ensuring that you have the latest version regardless of which particular device you access it from.

There is 15GB of free cloud storage for you to enjoy via OneDrive, where Lumia 530’s on-board memory is expandable up to 128GB thanks to a microSD memory card slot, which is heck of a lot of space to enjoy. Not only that, there are single SIM 3G and Dual SIM 3G versions of the Lumia 530 to choose from, where it will retail for less than €100 when it hits the markets this August.