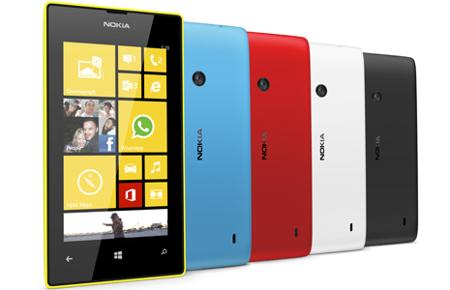 Now here is another smartphone from Finnish handset manufacturer Nokia that runs on the Windows Phone 8 platform that will maintain a balance between features and price, ensuring that your pockets will not be burnt and yet you will have a smartphone that will be able to duke it out with the best of them in terms of productivity. The smartphone in question? The all new Nokia Lumia 520.

So, what else do you find underneath the hood of the new Lumia 520? Of course, we all know that it will run on the Windows Phone 8 operating system, and apart from that, this will be a handset that supports WCDMA 900/2100, 850/1900/2100, GSM/EDGE 850/900/1800/1900 networks at 3G HSPA+ speeds, too. Other than that, expect the Lumia 520 to also sport 512MB RAM, 8GB of internal memory to get you started which can be further expanded via a microSD memory card slot, in addition to being able to enjoy another 7GB free SkyDrive storage.

Your eyes will definitely fall in love with the 4” IPS LCD WVGA (800 x 480 pixels) at 16 million colors, sporting a 2D hardened glass that offers super sensitive touch, even being able to play nice with mere fingernails as well as gloves, too. A dual-core 1GHz Snapdragon processor will keep things running without missing a beat, in addition to a 5-megapixel autofocus camera that does High Definition video recording, too. All of that is crammed into a form factor that measures 119.9mm x 64mm x 9.9mm and tips the scales at 124 grams. Connectivity options include Wi-Fi and Bluetooth 3.0.

The Lumia 520 will arrive from March onwards, arriving in Hong Kong and Vietnam first, although it will soon hit other worldwide markets such as Europe, Asia, Africa and Latin America in due time. T-Mobile has already confirmed that they will offer the Lumia 520, except that it will be called the Lumia 521 instead for easier identification. Pricing starts from €139 before taxes and subsidies.