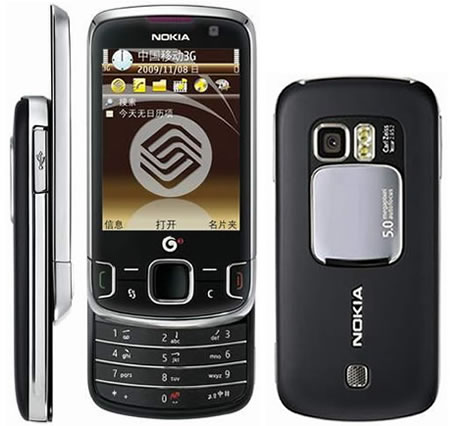 Nokia might be looking at its smartphone share in the US being eaten up like nobody’s business no thanks to its rivals from a variety of manufacturers who have come up with a much cleaner user interface and seamless ease-of-use. Still, that doesn’t mean this cellphone manufacturing giant is going to give up that easily elsewhere in the world. The Finnish company aims to strengthen its grip in the China market by announcing its first device for TD-SCDMA – China’s domestic 3G standard, simply known as the Nokia 6788. The Nokia 6788 is the result of close collaboration between Nokia and the world’s largest mobile phone operator, China Mobile. After all, in a country where there is more than a billion people will definitely offer an extremely lucrative potential market, no?

According to Olli-Pekka Kallasvuo, CEO of Nokia: “Nokia sees TD-SCDMA as being central to the successful evolution of 3G in China, and so is fully committed to this 3G standard. With a wide range of integrated China Mobile applications, the Nokia 6788 marks a new level of collaboration with China Mobile and offers enriched experiences to China’s 3G users. Nokia plans to introduce more TD-SCDMA phones in the near future, further boosting the development of this 3G standard in China.”

What can one expect from the Nokia 6788? For starters, this clamshell handset will offer Chinese consumers with TD-SCDMA solutions that are perfectly catered to their needs, thanks to all-in-one capability that include speedy mobile Internet speeds and download times to minimize the waiting period thus enhancing your productivity, a 5-megapixel camera with dual LED flash, a 2.8″QVGA display and the Symbian S60 platform which has managed to serve Nokia so well in other developing nations. The Nokia 6788’s exterior was inspired by traditional Chinese furniture and architecture, incorporating Chinese design elements that comprise of traditional Chinese patterns on the back of the slide and the battery cover. No word on pricing, although it ought to hit the market sometime during the Christmas period this year.