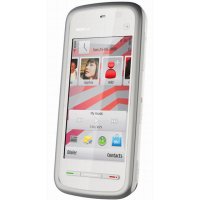 Finnish phone manufacturer Nokia is really late to the touchscreen phone market, with their 5800 not really setting the stage ablaze since its release, although it is by no means a major flop, doing quite well in certain markets around the world but never really showing off any capability of going anywhere near the iPhone’s dominance. Well, if at first you don’t succeed, try again – and that’s exactly what the folks at Nokia have done with the new Nokia 5230 – this handset was specially built for those who lead an active life and use their handsets as the main device for music, photos and videos, alongside all their online shenanigans.

The upcoming Nokia 5230 enables consumers to obtain new content from the Nokia Music Store, and it doesn’t only cater to just music as it is also capable of purchasing applications, games, videos and other services from the Ovi Store straight onto their handsets after making a virtual transaction. Other practical applications of this new Nokia cellphone would include A-GPS navigation and the latest version of Ovi Maps complete with aerial images and 3D landmarks that works great for more than 200 major cities alongside terrain map views for clearer pedestrian and drive navigation.

Interestingly enough, the Nokia 5230 doesn’t fall short in terms of battery life, offering up to 33 hours of non-stop playback on a full battery charge. It also supports the Comes With Music service that is still in its infancy, offering all you can eat music at a set price. Currently, the Nokia 5230 with the Comes With Music service will be going for 259 Euros before subsidies and taxes. Nice to see Nokia include a 3.5mm headphone jack that makes it suitable for use with most common headsets without having to fork out more money for a proprietary model. The Media Bar offers quick access to your favorite media and applications in a flash for quicker and faster navigation. Expect to see the Nokia 5230 ship sometime in Q4 this year.