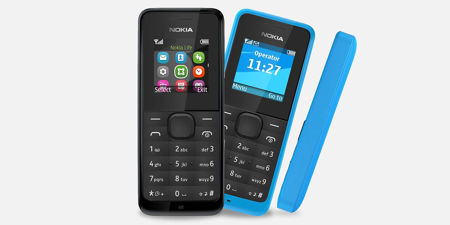 Nokia, now owned by the folks over at Microsoft, has long delivered its fair share of handsets to the world, and they have concentrated on the entry level as well as mid-range and high end smartphone markets, not forgetting their bread and butter for many years, too, in the form of feature phones. There is still a large feature phone market, especially in developing and Third World countries where folks just want a communications device that is functional and dependable. The Nokia 3310 was one of the last great feature phones, but it is time to look beyond one’s history and peer into the future with the recently unveiled Nokia 105.

You will find that the new Nokia 105 will boast of a slew of features and functions that users loved concerning its predecessor, and yet it moves on with the times by offering enhanced functionality and features. A Dual SIM variant helps you to keep your private and social lives separate o a single handset, which means you do not need to tote around a couple of handsets simultaneously.

Do bear in mind that this is a barebones handset, which means there is no room for a digital camera integrated within, as it runs on the Nokia Series 30+ platform.

There will be expanded storage for up to 2,000 contacts, enhanced audio for greater call clarity, an increased talk time for up to 15 hours, and up to 35 days standby time, arriving in cyan, white and black shades. The new Nokia 105 and Nokia 105 Dual SIM will cost for approximately $20 prior to taxes and subsidies – and you simply cannot get any more affordable than that!