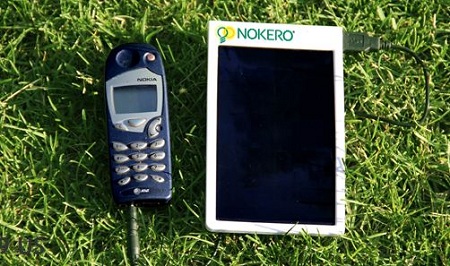 Many of us go to bed at night with our smartphones hooked up to a charger, making sure that we would be more than ready for the next day’s gruelling office run, where you have phone calls to make, text messages to send, emails to reply to, and even checking in your Foursquare account to make sure that you have not lost Mayor status at your favorite coffee haunt. That sounds like the norm for plenty of folks, but wait a moment and spare a thought for those who live in less developed countries, where getting an iPhone 4 is practically out of the question.
Those folks will have to settle for feature phones with monochrome screens instead, and forget about 3G or Wi-Fi connectivity. Heck, chances are pretty good they won’t even have access to electricity in their own homes – up to 500 million of them, according to a Hong Kong and Denver-based company who is currently trying to push their solar-power charging panels which targets those who live in off-grid, often impoverished regions of the world.

Nokero International’s offerings come in two versions – the 1-watt P101 and the 2-watt P102. They both do not have any battery within, but will instead rely on the sun’s light to directly juice up a connected device. The 1-watt P101 is capable of charging a typical cell phone in a mere three hours, while if you opt for the more powerful 2-watt P102, that gets the job done in just half the amount of time.
These pocket-sized panels will be USB compatible and ship with relevant phone adapters, although you are out of luck if you want to juice up your smartphone. These are clearly meant for feature phones only, so take note f that. This is where Nokero intends to separate itself from the rest of the pack, catering to entry-level devices instead. Just how much do you think you need to pay for such green convenience? The P101 will retail for $29, while the more powerful P102 is nearly double the price at $49.
Source