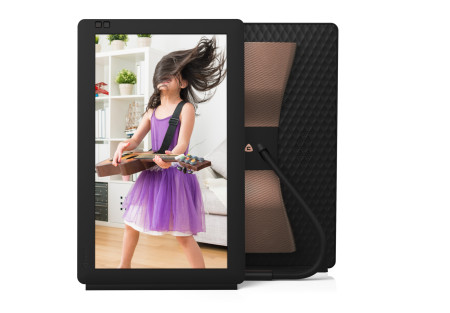 Digital photo frames used to be of interest in the past, although it never really took off in a manner which became a trend. However, this does not mean that there is no way for a somewhat similar idea to take hold of in the future. The all-new Seed Wave from Nixplay has just been announced at CES 2019, and it is surely an interesting proposition for anyone who would like to spruce up their home with something out of the ordinary.

The Seed Wave will introduce a new dimension in both sound and music to its best-selling smart connected photo and video frames, where Nixplay users will then gain the ability to curate music as well as include all-in-one audio to their photos and videos. The Seed Wave is no slouch when it comes to performance, delivering a 13.1-inch widescreen display, all for an asking price of $249.99 apiece.

The design itself is pleasing to the eyes, as it is based on the best-selling Seed range, where Nixplay knows the value of audio quality which is why they have decided to include a couple of premium 5-watt Bluetooth speakers in addition to a dedicated bass and audio amplifier into the Seed Wave. This provides the option for Nixplay users to stream music from their Bluetooth-enabled devices, as they perform the simple task of pairing up a compatible smartphone, tablet or PC to the Seed Wave. Such improved functionality will also empower Nixplay users with the benefits of enhanced audio performance when replaying their video memories, all on a crisp widescreen frame.

With everything that is connected these days coming with an app, the Seed Wave is no different. The Nixplay Mobile App will allow users to enjoy on-the-go functionality and creativity, letting them share photos and videos straight from the app to the Nixplay frame regardless of where they are, as long as the Seed Wave is hooked up to a Wi-Fi network. Not only that, all Seed Wave owners will benefit from 10GB of secure and free online cloud storage to boot, making this an extremely interesting proposition.