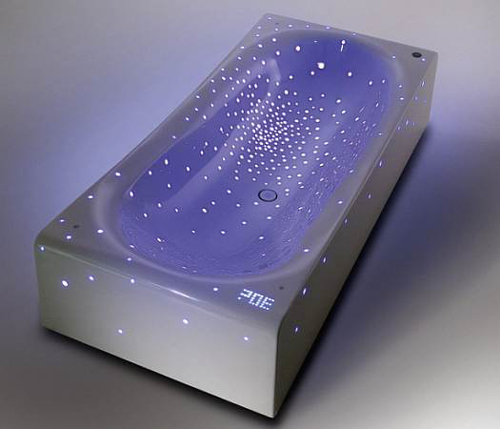 It used to be that a few candles were all someone needed to get a little mood lighting in the bath tub.  Now there are all kinds of gadgets meant to project LED stars onto the walls and ceiling to set the mood.  Well now you can go one step further to get yourself a luxurious bath that does the same.  Instead of having something floating along with you in the tub, the tub itself is what shines so brightly.  I suppose it would simplify things, plus there would be no risk of fire due to knocking over candles.

The bathtub doesn’t just feature bright sparkly lights, it also manages to use less water while still not sacrificing your own comfort.  It uses 60 percent less water than bathtubs featuring a similar sizing.  It does this by using shallow high-grade translucent acrylic shape.  To control the 360 LED lights there is a integrated system underneath the tub.  Within that control panel is also an electronic tap that will automatically fill and stop filling up your bathtub.  The Nirvana Bathtub won the Red Dot 2009 competition.  However, as of right now there isn’t a whole lot of info on purchasing, so it’s likely this is still in the design stages.