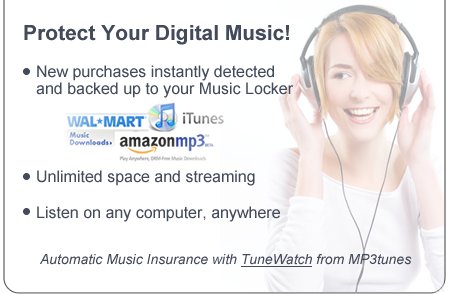 The Nintendo Wii isn’t about to be left behind in terms of all round entertainment. While most of us would associate the Wii with some sort of arm flailing action in the living room (more fun when you’ve had a couple of beers IMHO), MP3tunes has taken a different step by allowing Wii owners to use the device’s controller to wirelessly stream their personal music collection from their own Music Lockers. Tracks are all stored in the MP3tunes Music Lockers which incidentally, can also be played on the PS3, a range of Windows Mobile devices and Internet radios among others, courtesy of MP3tunes’ open API.

According to Michael Robertson, CEO of MP3tunes, “The Wii is the latest popular gaming device that, with MP3tunes’ technology, actually becomes a home stereo system. Consumers shouldn’t be limited in where or how they enjoy their personal music collections, and we will continue to announce new ways MP3tunes is fulfilling its vision of giving people access to all of their music, anywhere they go.”

Currently, MP3tunes is offering free playlists that can be sideloaded to the Music Locker for immediate access on the Wii as well as various compatible devices, Emily Richards, President of MP3tunes commented, “”To demonstrate how simple it is to add playlists to a Locker, we’ve created, in partnership with CDBaby, a terrific New Year’s Eve music set for our customers. With just one click, this New Year’s playlist is sideloaded to your Music Locker for access on dozens of devices — with no listening limits.” While listening to music is a nice function to have on your console, I would say the Wii concentrates much more on being a gaming machine than anything else, so having the abilities like what MP3tunes offer isn’t really going to make more Wii fly off the shelves (if you can find one, that is). As the adage goes, “It’s all in the games!”