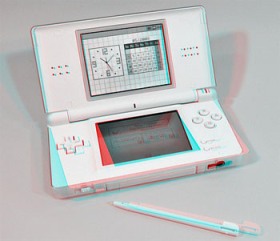 Just when I thought that I could focus on reporting on the mobile technology at CTIA, an announcement comes forth out of nowhere that makes me drop everything.

In case you haven’t heard, Nintendo is not only planning on replacing the DS with a DS2, but they are going to skip a number and sell a 3DS. I suppose it skips the number because it is going to be way more advanced than the DS, and it will also be in 3D.

That’s right, 3D. You know that type that you saw in Avatar and the television companies want you to purchase. Unlike those 3D venues, this 3DS will not require any special glasses.

I am so not sure how that will happen, as glasses free TVs are not estimated to hit the market for five to ten years, says industry experts. Nintendo is is pretty silent as far as how that is going to happen. However, word is that this guy won’t be released until around this time next year (March 31, 2011), and it will be reverse compatible with other DS games.

By the way, Nintendo stock climbed 10 percent. Microsoft and Sony are probably wondering what they can do now to compete. Oh, and that Move looked so good.