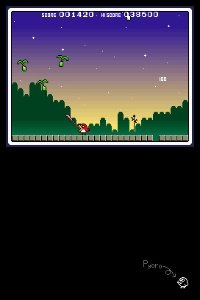 Mark April 5 on your calendars, boys and girls! At least, this date is significant for folks living in the Us and Europe as they would’ve finally gotten their hands on the Nintendo DSi, months after this handheld console was released in Japan. This is the third iteration of the DS family line, from what was originally a third pillar from Nintendo back in the days when Sony seemed to conquer all while Nintendo looked set to follow Sega’s path where home consoles were concerned. Oh how the tables have turned since then – the DS took off with its veritable software library followed up by its revamp in the hugely successful DS Lite, while the Wii slayed all competition despite being the weakest (architecturally speaking, of course) among the current batch of home consoles. The DSi has finally made its way to both North America and Europe, offering added functionality with a couple of integrated interactive cameras. In addition, April 5th also marks the launch of the Nintendo DSi Shop which is actually a new online storefront that enables users to redeem Nintendo DSi Points which can be used to download an ever-growing variety of inventive games and applications.

We need not go through what the DSi has to offer in terms of hardware capability since we’ve already covered that bit in the past, but we’re here to concentrate more on what the DSiWare titles offer. Some of the launch titles of the DSi Shop include :-

WarioWare: Snapped! – Using the built-in Nintendo DSi camera, this outrageous title puts players right at the center of fast-paced mini-games, challenging them to race the clock and get a peek at Wario’s photo album.
Bird & Beans – Using an elastic tongue, players must scramble to collect falling beans. The harder a bean is to catch, the more points it’s worth.
Brain Age Express: Math – In this math-focused edition of the popular Brain Age series, players can enjoy a mix of new and familiar training exercises. A new Themes mode also lets Nintendo DSi users experiment with images and voice recordings in fun, unusual ways.
Master of Illusion Express: Funny Face – This game uses your Nintendo DSi as a prop in a card trick. Draw a face on the touch screen and astound your audience as the face tells them which playing card they picked.
Art Style: AQUIA – The newest addition to the eye-popping Art Style series, this mesmerizing underwater puzzle game challenges players to help a scuba diver reach the ocean floor by matching a series of colored blocks.

No only that, you can also download a free DSi Browser that is powered by Opera for portable access to the Internet that will be a much more memorable experience compared to Nintendo’s earlier outing which required an additional accessory purchase and yet was a letdown in terms of web surfing. The Nintendo DSi will retail for $169.99 and comes in blue or black colors.