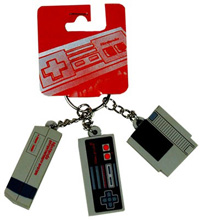 If you’re a geek who grew up in the late 80’s, you can’t help but hold a special place in your heart for Nintendo. It’s just how it is. Super Mario, Paperboy, Duck Hunt. These are all games we grew up spending hours doting over. While we might have high-tech alternatives these days, such as the PS3 and Xbox 360, sometimes there’s just no alternative for the classic 8-bit system.

As awesome as PS3 might be, you don’t see anyone walking around with PS3 keychains. And you probably shouldn’t plan on it either. NES was a trend setter. It showed us how gaming could bring us together while entertaining us alone as well. Which is why there are so many people which would be honored to display their love of retro gaming, right from their keychain.

This set of Nintendo console keychain charms offers mini versions of the console itself, a game cartridge, and the NES controller. All three of these legendary classics are included on one keyring. It’s a perfect way to show off your old school gaming pride, while spreading the word about the wonders of 8-bit gaming.

The NES keychain set can be yours for only $5.99. We’ve got to admit, that’s quite a bargain for the chance to rock your favorite console of all-time right from your keychain. As geeks, we might not always be chic, but damn are we cool.