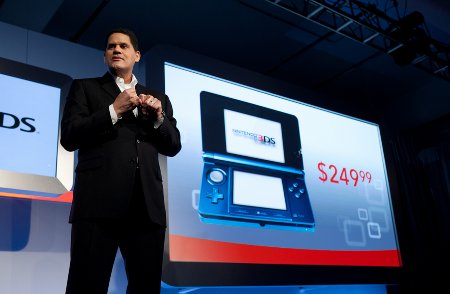 Stereoscopic 3D is where it is at, and Nintendo is not slow off the mark to make sure they are there at the very beginning to capture a potentially lucrative market with their upcoming portable 3D-enabled console, the aptly named Nintendo 3DS. This will definitely be yet another shift in the gaming industry, having first rolling out touch-screen gaming in 2004 and motion-controlled gaming in 2006, where March 27 2011 will be a date that many will look forward to. Nintendo’s 3DS will finally be available to the masses, bringing portable entertainment in 3D without having to purchase a pair of special glasses to begin with. While the initial choice of colors are pretty disappointing by Nintendo’s standards (you can choose from only Cosmo Black or Aqua Blue), we are pretty sure that the Big N will be rolling out more color variants down the road as they normally do.

The Nintendo 3DS has been called to be in a category of its own – simply because it offers an experience that cannot be found anywhere else in terms of portable gaming. Folks residing Stateside will have to fork out $249.99 for this toy, while those living outside of the US Will be subjected to pricing set by local markets, although you can be sure that the gaming experience will not fall short anywhere.
Just in case some of you have been living under a rock for the past year, the Nintendo 3DS will share the DNA of its predecessor in terms of the form factor and number of screens – and while the bottom screen is touch sensitive just like its ancestors, there is a change to the top screen since that part is able to display 3D visuals to the naked eye sans any glasses. In fact, it is said that looking at the screen is akin to peering through a window into a world where characters and objects have true depth. There is also a 3D Depth Slider which allows you to select the level of 3D that your eyes can take, not to mention help prolong the battery life if you decide to lower the depth or turn it off altogether. The Nintendo 3DS also includes a Circle Pad that delivers a full 360 degrees of direction, giving it the freedom and precision needed to play games in 3D worlds. Those who have had experience with the Nintendo 64 will probably know what we’re talking about here. Game on! I know what I want for Christmas this year.
Press Release