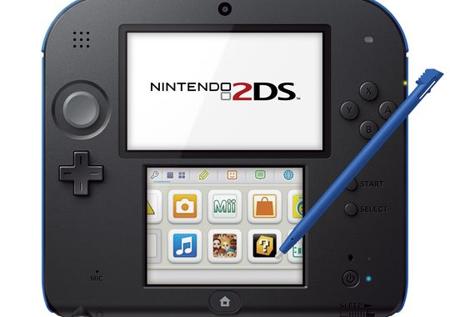 Nintendo has always been one to pioneer new ways and methods to play games, and this time around, their most recent console announcement would target the handheld arena instead of the home console segment. The Nintendo 3DS proved to be the most recent addition to the portable handheld console department, delivering 3D graphics to the masses without having to wear an actual pair of 3D glasses, but the Nintendo 3DS has just been superseded by the Nintendo 2DS. No, this is not a typo, and your eyes are not playing tricks on you, but the Nintendo 2DS will ditch the horizontal clamshell form factor that was first introduced via the original Game & Watch family from the Big N, and will instead adopt a slate format which might prove popular with tablet lovers.

The Nintendo 2DS was specially designed in such a way that anyone who wants to jump into the world of Nintendo 3DS games without having to fork out a bomb for it will be happy with the suggested retail price of $129.99 a pop, where it will arrive in either red or blue shades this coming October 12th. Sure, the main reason for calling the Nintendo 2DS as it is, would be the fact that you can forget about any kind of 3D gaming on it, since the display will be an ordinary 2D display. That might be a bummer for some, but hey, think of the far longer lasting battery life since you need not push the display to a different level of performance, and when it comes to engaging games, there is nothing quite like a super long battery life to get the job done.

The Nintendo 2DS is capable of handling the whole library of packaged and downloadable games for Nintendo 3DS, albeit it will arrive in 2D format. The system itself boasts of a distinctive fixed, slate-type form factor, while you will also be able to grab hold of optional carrying cases that will come in either red or blue colors at $12.99 each. Most of the Nintendo 3DS’ hardware features will be retained by the Nintendo 2DS, including dual screens, game-play controls and touch-screen features. To sweeten the deal, the Nintendo 2DS is also capable of handling the current library of over 2,000 Nintendo DS titles, now how about that? If you are bored, you can also access wireless connectivity features including multiplayer online game play, fun Nintendo Video content and great digitally delivered games in the Nintendo eShop.