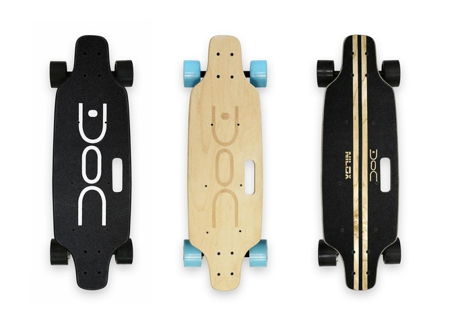 DOC Skate is a new way of getting around while going green — without requiring you to purchase a hybrid car or perhaps even to buy a fully electric Tesla P100D. If you happen to work just a few blocks from where you stay, and public transport is not as efficient in this manner as it would be walking to the office, perhaps the DOC Skate electric skateboard is going to be your cup of tea. Granted, this is not the first electric skateboard in the market and it definitely will not be the last, but check out what it has before you decide on whether to give this a go or a pass, right?

The DOC Skate will follow in the footsteps of the DOC Hoverboard as well as the DOC PRO electric scooter. This unique, super-fun device will merge both street design as well as innovative technology, and the inclusion of a gyroscope, accelerometer, and algorithm will work in tandem with one another so that the rider on the DOC Skate will feel as though he or she is “floating” on the surface, or that of “surfing” on an electric wave.

There are two modes in the DOC Skate: Slow mode which is recommended for entry-level users as it carries a maximum speed of 6 km/h in 3 seconds, while there is Speed mode which will be recommended for pro users, allowing users to arrive at a maximum speed of 15 km/h in 5 seconds. Not only that, the DOC Skate is able to fully recharge itself in a matter of 2.5 hours while sporting a guaranteed battery life of 25 km. Assuming you commute within just a few blocks each day, it should be able to last you for four or five days at the bare minimum before requiring a recharge.

Each DOC Skate can be controlled by a small remote-control, where users have the liberty to select the direction (forward/reverse,) as well as accelerate by moving the control stick forwards. Braking is simple — just shift the control stick backwards. One will be able to choose from wood/blue and wood/black versions which will retail for 529.99 Euros, while the “PLUS” model which carries Bluetooth connectivity will cost 40 Euros more.