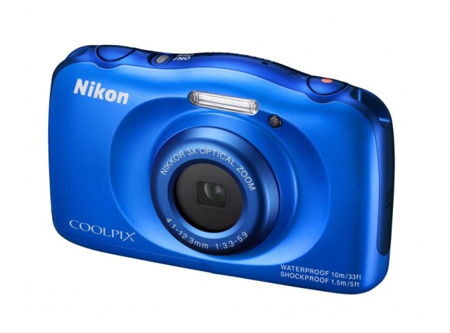 Smartphones have evolved to include some decent cameras – and not only that, they are also full well capable of delivering a slew of functions, performing on-the-fly edits to images that have been captured on your handsets earlier on, and manufacturers like Sony and Samsung have also included waterproof capability into the mix for a more robust handset. Having said that, here we are with a new digital camera from Nikon, which will not only offer waterproof capability, it looks young and fresh while doing so. I am referring to the Nikon Coolpix S33, which we shall take a closer look at right after the jump.

For starters, the Nikon Coolpix S33 is capable of delivering worry-free performance that supports use by the entire family, from children to adults. It does not matter whether the children happen to be enjoying themselves by the pool or at the river bank, as the Nikon Coolpix S33 happens to be waterproof to depths of approximately 10 meters, and it is also well acquainted with the fact that gadgets in the hands of little ones tend to suffer from the random drop and knock – which is why it has been shock-proofed in order to withstand falls from up to approximately 1.5 meters. Fancy visiting another place this coming winter? The Nikon Coolpix S33 would also like to follow you, since it has cold-proofing that is capable of withstanding temperatures as low as approximately -10°C.

Apart from that, the Coolpix S33 comes with an effective pixel count of 13.2-million pixels, and is equipped with a 3x optical zoom NIKKOR lens. Not only that, it will also be equipped with Dynamic Fine Zoom, which can then be used to achieve approximately 6x zoom – allowing the resolution to be preserved in the digital zoom range. It will also boast of a new Underwater Face Framing function that detects and automatically captures human faces while one is under water, whereas the Target Finding AF can detect the primary subject and focuses on that subject whenever the shutter-release button is pressed halfway. Seems to be worth checking out, don’t you think so?