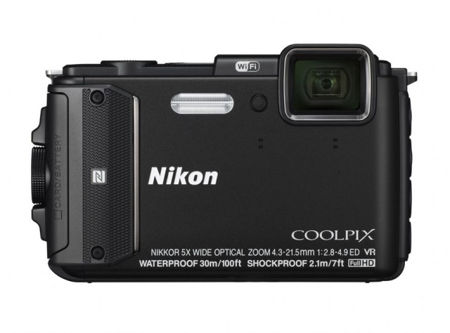 If a company were to remain the same without new product releases from time to time, you can be sure that it is not going to last too long, even more so in this day and age where technological breakthroughs and innovations happen at a breakneck speed. Well, here we are with the Nikon Coolpix AW130 digital camera – which will be an improvement over its predecessor, the cool looking Nikon Coolpix AW120 that was announced a year ago. Yup, it is that time of the year again, where major camera manufacturers roll out new editions of their shooters, packing in more megapixels, and, er, well, that seems to be the case at the bare minimum.

Taking in plenty of punishment in its stride, the Nikon Coolpix AW130 is one rugged camera that is certainly able to shrug off the kind of abuse that you throw at it – including being waterproof to depths of up to 30 meters, not to mention the capability of being able to withstand the shock of falls from approximately 2.1 m, in addition to braving the frigid temperatures when the mercury drops to as low as -10°C

In other words, the Nikon Coolpix AW130 is waterproof to depths that would enable folks who have with a recreational diver’s license equivalent to the PADI’s Advanced Open Water Diver license to be able to record photos and movies while diving to approved depths, all without the need to make use of a separate underwater housing. Apart from that, the shockproof capability and cold proof ability makes it a decent candidate to bring with you wherever you travel.

In a nutshell, the Nikon Coolpix AW130 will cater to those who indulge in leisure activities as well as hard-core outdoor activities, and there is also an accompanying accessory (which is sold separately) – the extremely portable, compact and lightweight Underwater Speedlight SB-N10, which would let you shoot stunning photos at depths of 30 m where little surface light reaches. Sounds like an interesting shooter, don’t you think so?